If you’re aiming for historical accuracy, you can’t just use any window in your home. Every architectural style commands a unique design validated by time. Unless you live in a Ranch-style home, which borrows elements from other styles, know your home’s quintessential window when replacing your old units.

To design your new windows in a historically accurate way, Renewal by Andersen® of Omaha and Lincoln explains what’s emblematic of the region’s popular homes:

Casement units have been synonymous with Tudor architecture for centuries. What sets them apart from other crank windows, though, is their diagonal grilles, which form little diamonds and triangles. Interestingly, only the glass units on the second floor of some Tudor homes feature the lozenge grille pattern. The first-floor windows mimic the style of patio doors, which feature crisscross lines.

The Craftsman, particular its bungalow type, is big on double-hung units. However, its modern interpretations utilize casement windows that masquerade as sash units. Whatever the style, its windows are easily distinguishable with a horizontal rail in the middle of the glass intersecting with two vertical lines. The portion below the rail has no grilles, providing an unbroken view.

Like its cousin the Victorian, Queen Anne has bay windows with double-hung flankers. Its grille pattern is rather playful, creating a large square in the center of the glass bordered by tiny squares. The grilles are exclusively applied on the top panel and leave the bottom one unobstructed.

The window design of most modern architectural styles lays emphasis on size and simplicity. Contemporary homes usually prefer glass walls to solid ones, producing a seamless connection between the outdoors and the indoors. They use grille-less units with thin frames, trying to eliminate any evidence of windows.

At Renewal by Andersen of Omaha and Lincoln, we’ll use our rich architectural knowledge to lend your home its distinctive character with historically accurate windows. We can bring any grille pattern to life, giving your home’s windows an iconic look.

Call us today at (402) 513-2828, or fill out our contact form for an in-home consultation. We serve clients in and around Omaha, Bellevue, and Lincoln. 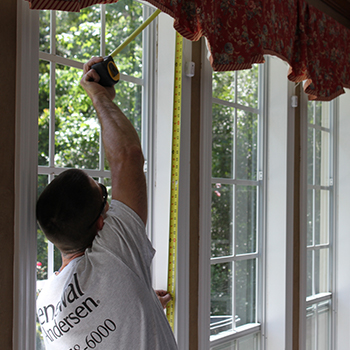 Find your location below and let's get started!

Learn more about our COVID-19 response and updates